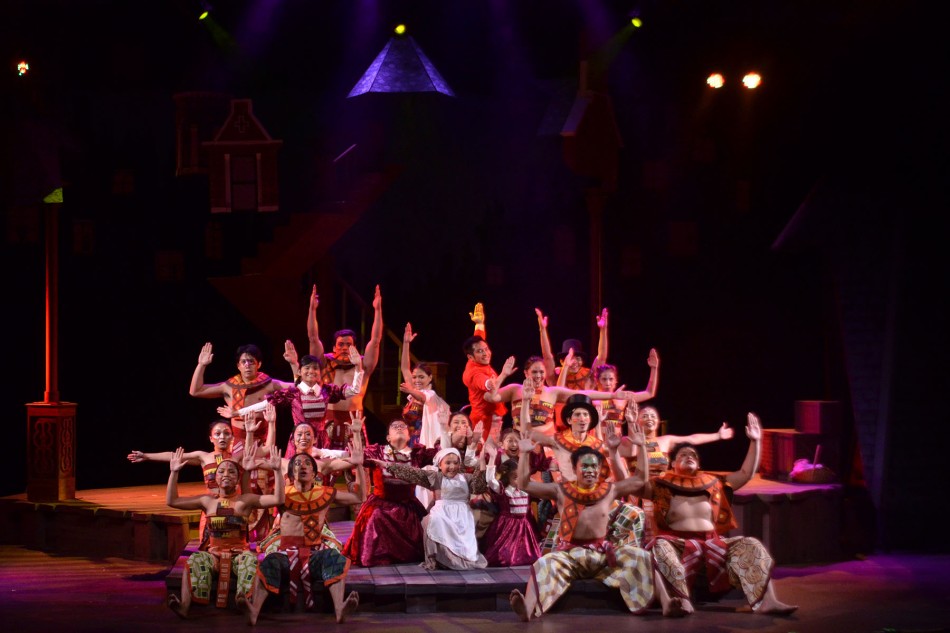 The spotlight shines on Sara Crewe, alone in her bed chanting in a foreign language. It’s not a familiar lullaby that’s coming out of her mouth, but something more intriguing. Before we could enjoy more of it, she’s interrupted by a young maid named Becky, who drops by to make sure that she’s okay and, while at it, get to know her better. Seconds later, men and women in traditional African clothing enter from all corners of the stage, singing and dancing to a festive tune — and we’re introduced to the world of a little princess.

Sara has been living in Africa, until her Timbuktu-bound father, Captain Crewe, has to send her to a London boarding school while he’s away. Because of Sara’s beauty, wealth — all the wonderful things going for her — the other girls at school, including headmistress Miss Minchin, aren’t very warm towards her. She’s however won friends with her personality, which she shapes by conforming to the ideals of a princess: kindness, grace, magnanimity.

To close its 79th season and usher in the holidays, Repertory Philippines brings A Little Princess, with book and lyrics by Brian Crawley and music by Andrew Lippa. The inspiring and energizing rhythms of African music pervade this stage adaptation of the Frances Hodgson Burnett classic (it’s interesting to note that Sara has lived in India in the original novel; makes you think if the decision to change locations is musically motivated). “African music is mostly five-four — not a common time signature I get to do in musicals, so that was a blast,” says musical director Ejay Yatco in describing the distinct pleasures of interpreting the score. “And I loved having live percussion.”

In almost every scene, there is a song and dance number that’s larger-than-life, like a child’s wild imagination. At times they disrupt the flow of the story, and even appear comical (a few giggles may be heard as meticulously costumed dancers jump from out of nowhere); but they never fail to elicit an appreciative applause from the audience. Credits go to director Dexter Martinez Santos’ breath-taking choreography, and the performers’ commitment and spot-on execution.

This visual and aural vibrancy makes up for whatever complexity the story lacks. Those who grew up reading the book and watching the movie and TV reincarnations of the beloved tale may find the onstage narrative slow, that come the second act, the action seems to rise and fall in a snap. Sara’s downfall after news of her father’s death is barely explored for it to draw an emotional response. We also won’t see a more colorful, even three-dimensional Lavinia. She consistently serves as a catty, resentful contrast to Sara, that’s why it’s jarring when she has suddenly reconciled with the little princess towards the end.

Two characters that are a joy to watch are Roselyn Perez’s Miss Minchin and Jillian Ita-as’ Sara Crewe. Eschewing the stereotypical heroine-villainess dichotomy, the lead actors play their roles in a way that make them believable and deserving of empathy. Roselyn’s interpretation of Lucky (Had I had her start in life / I’m sure I might take part in life / Had I been lucky / lucky like her) is painful yet defiant, giving a glimpse of Miss Minchin’s vulnerability without abating her steely nature. Jillian, on the other hand, provides the charming blend of tough, smart, and caring.

A Little Princess is an engaging musical that encourages playfulness and wise use of imagination. We become what we pretend. One of the nicest scenes in the show has Lavinia mocking Sara’s pretensions to being a princess. To which Sara replies, “If I do like to play pretend, Lavinia, it’s lucky for you,” because if she didn’t, she would’ve already done something savage to Lavinia. This is not your typical Christmas story for children. It isn’t filled with ghosts or supernatural creatures. There is no magic here. Only a girl with an imagination, some damn good music, and human beings practicing kindness to an excess.

Rep’s “A Little Princess” runs from November 18 to December 18, 2016 at OnStage Theater at Greenbelt 1, Makati. For tickets, call Rep at 843-3570, Ticketworld at 891-999, or log on to ticketworld.com.ph. For updates, visit repertoryphilippines.ph and follow @RepertoryPhilippines on Facebook and Instagram, and @repphils on Twitter. Join the conversation by using the hashtags #ComeHomeToRep and #RepPhilsALittlePrincess.

0 comments on “African beats bring magic to ‘A Little Princess’”