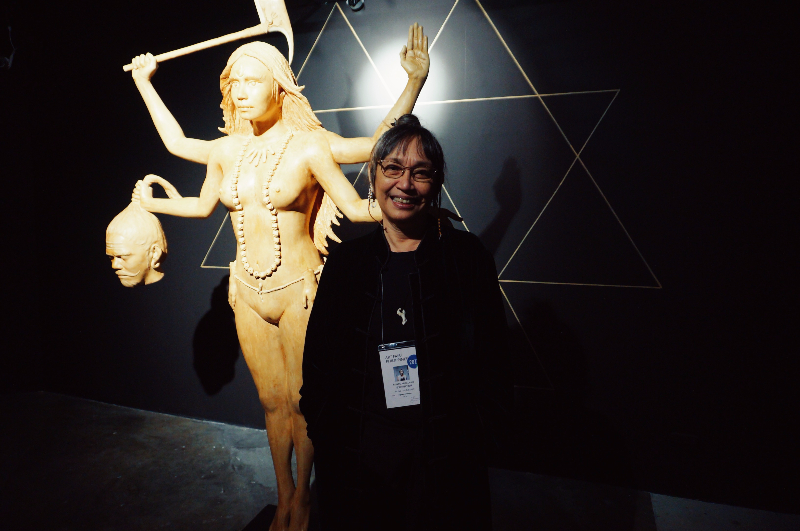 Arellano’s “Project Pleiades,” in which “Pleiades” refers to the Seven Sisters of Greek mythology, is a wish to the world that is rightfully cross-cultural. Agnes brings together deities of different backgrounds, such as Isis of Egyptian mythology, the Bicolana moon goddess Haliya, the Mesopotamian goddess Inanna, and the often misunderstood Mary Magdalene, and brings them to life through sculptures stained in Chinese tea, their bodies molded after Arellano’s own, three decades ago.

Arellano explaines how men and women have abided by patriarchal society for so long that humanity has lost the motherly element in all of us: “I specifically focused on the goddesses because there’s an overload of the masculine element. Everything is rational, scientific, very linear. You have to be on top. You have to compete. But the goddess mindset is completely different; you don’t think about the rational side, you think about the intuitive.”

Arellano’s sculptures all have an open third-eye to represent the value of intuitiveness. “Being intuitive can be many things because, yeah, you can see or read, but yung intuition goes beyond,” she says. As masculinity pressures mankind to suck it up in the name of business, Agnes encourages humanity “to start looking for the goddess inside ourselves, whether you’re a man or a woman.” She adds, “Diba may Yin-Yang ang bawat tao? It’s time to look at the more feminine aspect; the one that’s more nurturing, caring, and inclusive.”

1 comment on “Agnes Arellano’s ‘Project Pleiades’: The world is ending but feminine goddesses could save the day”