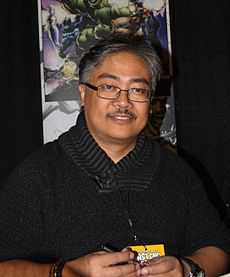 It comes as a surprise when the man behind one of the most iconic characters to ever come to life within the pages of comic books turns out to be someone who still gets quite the rush whenever people talk about the art form in a non-disparaging way.

“The whole world now thinks what I do is interesting!” Whilce Portacio, 50, says in an interview. “Back then no one was paying attention to us, we were just creating what we wanted to read ourselves.”

Portacio, of course, is the brain behind the massively popular mutant superhero Bishop — who recently took to the big screens as part of the ensemble cast of the massively popular blockbuster film X-Men: Days Of Future Past — as well as countless other titles and series he’s had the pleasure of writing and illustrating for the past two decades.

And it seems a storied career was always in Portacio’s stars: his first look at comics by the legendary Jack Kirby and Neal Adams was made possible by a neighbor who was throwing out her husband’s old comic book collections, and his high school years were spent drawing comics with fellow future legend Scott Williams.

Taking his chance at the first San Diego Comic Con he attended, Portacio had his portfolio checked by Marvel editor Carl Potts, an event that eventually led to his start at Marvel in the ‘80s as an inker for the Alien Legion series, followed by inking gigs on The Punisher, X-Factor and Uncanny X-Men titles.

It was in the ‘90s however that Portacio, then newly-promoted to penciller at Marvel, really took off, alongside fellow artists Todd McFarlane, Jim Lee, Marc Silvestri, Erik Larsen, Jim Valentino and Rob Liefeld, all of whom, Portacio included, would eventually break off from the famed House of Ideas to form their own company, Image Comics, now the third largest comic book publishing house in the world, next to industry giants Marvel and DC.

Though he has Marvel to credit for his rise to comic book stardom, it was during the early days of Image that he found himself enjoying creative freedom, no matter the amount of risk it entailed. After all, it was only then that he got to really create and explore stories that were truly his own, and not of others.

Comic book creation was a different beast back then, Portacio says, emphasizing that artists and writers often didn’t have any idea about the kind of reception their works were going to get until after their publication.

It’s a lot different now, Portacio says, and it’s all because of social media. “We can now talk directly to our fans while we are creating, instead of them waiting till after our work gets published,” Portacio — who, as it turns out, maintains his
own website and social media pages — explains, adding that if this trend of readers wanting to try and build interactive relationships with creators were to continue, then a future where creators will only have their readers to answer to, free from corporate interference, will be the norm.

“…The future will be one where new, unknown indie creators will create their works on the Internet and then gain a social network following,” Portacio says, “They will buy directly from them, thereby allowing these creators to never work for anyone but their audience.”

Also gone now, Portacio notes, are the days when illustrating comic books and graphic novels were solely in the realm of ink and pencil and paper. And while he says nothing could ever replace the traditional methods they employed during their days, he won’t be the first to dismiss the boons brought by new technology.

“Doing art is always time- consuming and tiring. With the new art programs and apps, and the new high-end tablets, new technology makes drawing comics faster and easier, and more responsive to what I feel works better artistically ,” Portacio says, adding that the portability of today’s technology also allows him to work anywhere in the world at any time, which, he says, then allows him to do more.

Portacio, known for injecting Filipino elements in his works — remember the ‘Makulit’ jacket worn by the X-Man Colossus? — remains a staunch supporter of diversity in the creative industry, noting in a talk at Comic Odyssey last year that he believes that it’s time that Filipino artists and culture spread itself all over the world.

“Years ago, we’d see Japan’s influence in pop culture through Godzilla, manga, anime, ninjas etc. The world just gobbled it up because it was new. Then the world wanted something new and that became Korea with their K-Pop and whatnot. But it is slowly changing again.” he says

“I grew up in America, never getting exposed to Pinoy culture. Drawing comics, and the popularity of my work within the Philippines has allowed me, through the years, through my fans and my success, to really get to know my roots as a Pinoy,” Portacio emphasizes.

So, will Portacio, the man behind the agimat-wielding Stone, be reviving his motley crew of characters? “Secret!” he says as the interview comes to an end, before adding, “it’s time to show the world more Pinoy heroes!”

0 comments on “The uncanny ways of Whilce Portacio” 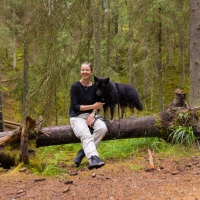