Had Amy Zhang been a cookie-cutter teenager, this particular Tuesday afternoon would be spent in her room, with her doing everything a college student her age would do: organizing her readings, studying for her exams, and reviewing her lessons. Not, you know, preparing for hours of signing books and meeting scores of readers in a country half a world away from the United States.  “I never expected to be a writer,” Amy, now 19 and currently in the Philippines for a string of book signing events alongside fellow author Andrea Portes, tells me during our conversation at the Writers’ Bar in Raffles Makati.

“My mom and dad are deep into the math and science fields respectively so growing up, it was kind of put it in my head that I was going to be an engineer or maybe work in finance,” Amy says, laughingly adding that the most liberal career track she ever got around to consider taking was law. “The most liberal I ever got was to be a lawyer. So no, I never thought I would be a writer until I started writing and even after I was agented, the thought that kept popping into my head was that I was going to work in finance and just write books on the side,” Amy says.

Born in China and currently based in New York, Amy has written two novels: her 2014 debut, Falling Into Place, which started out as a high school English assignment, and This Is Where The World Ends, which first saw print early this year. Both books, a quick GoodReads skim reveals, have drawn critical acclaim, with readers quick to point out — passionately, if I may say so — that her words resonate with them.

“I think the goal of every book is to evoke reactions from a reader, or to make a reader say, ‘I recognize myself’ or ‘I’m not alone.’ And for me, a part of the reason why my books are getting those reactions from my readers just stems from the fact that this was my life. I was writing in high school and these were the issues my friends and I were having,” Amy says, adding: “I think it’s easier to resonate with an audience that you’re a part of.”

But what about those who hate on Young Adult literature?

“I think part of the reason why Young Adult literature is so dispar- aged and not held to a higher level of appreciation like say, The Paris Review, is because its predominant audience is teenage girls,” Amy says, adding that not only is it frustrating, it’s also wrong: “It’s incredibly frustrating to me that we tell girls that the things they like aren’t important or valuable, that their opinion is wrong, and that’s just harmful and awful.”

Amy’s debut novel, Falling Into Place, which revolves around a girl’s suicide, as well as her sophomore literary outing This Is Where The World Ends, which centers on abuse and manipulation, anchor themselves well in the literary gray area where Young Adult and Contemporary Fiction bleed into one another, with the books using the language of high school to communicate and effectively contextualize ideas regarding the darker aspects of life, such as suicide, bullying, abuse, addiction, and teenage pregnancy.

Drawing inspiration from the likes of Markus Zusak, Margaret Atwood, and Laurie Halse Anderson — all of whom Amy describes as “the authors who make me want to write” — Amy crafted books that are as delicately and beautifully written as they are emotionally painful, raw, and brutal, effectively cementing her titles’ status as veritable breaths of fresh air in a genre long saturated by overly sweet, sugar-coated tween narratives.

“From the get-go, Falling Into Place was always going to be about a girl who committed suicide. This Is Where The World Ends, on the other hand, came about because I was just more interested in the relationship between two people and the story just kind of grew around that,” Amy says to me at the hotel bar. She continues: “I didn’t set out to let all these awful things happen to these characters — I did know I wanted to explore themes like rape and sexual assault — but it got really dark faster than I expected it to.”

Contrary to what others are saying, it wasn’t a conscious decision, bringing in all these dark, heavy stuff to her novels, Amy says, noting that rather, she saw it merely as a means by which she can create a literary reflection of reality: “The bad stuff happening to my characters, it wasn’t really a conscious decision; it was just the things I was frustrated with at that time, the realities I wasn’t happy with and felt helpless to change, and writing was just one way of dealing with that.”

Lest you get the wrong idea, though, Amy says not everything is bad: “Yes, awful things happen but also, great things happen and there are a lot of great people in the world for every awful one.”

Young Adult fiction, for the most part, has been the veritable playground of young, straight white boys and the men who wrote
them into existence. Not anymore.

“The increased diversity in literature right now is amazing,” Amy, whose books employ narratives told by offbeat, nuanced, and multi- layered characters, says, adding that she is impressed by to- day’s Young Adult titles and its impressive chunk of leads composed of LGBTQIA+ characters and people of color — a far cry from the genre’s conservative, white bread origins.

“The point of books is to make us feel that we’re not alone in like whatever awful, angst-y, hormonal things we’re feeling and it’s so important to look at a book and be like ‘Oh, I’m not the only one who’s feeling this way’ and I think it’s unfair that for so long the only thing available out there were these white, heteronormative male narratives,” Amy says, adding: “Your teenage years are a really impactful, important part of your life and the literature you read then is similarly, also important. I’m just so glad that this change, this revolution, is happening.”

Already a burgeoning superstar in Young Adult literature — as proven by scores of screaming fans at the book signings in Manila and Cebu, as well as the interaction she gets in social media — Amy has advice for aspiring writers who have yet to write their own stories: just do it — and don’t give up.

“Read as much as you can. Read outside of your genre, your category. Read something you never thought you’d like. Read things you’ve never read before or expose yourselves to ideas and styles that you wouldn’t have seen otherwise.”

Truth be told, Amy has come a long, long way ever since she first turned in that fateful English class assignment some two years ago. So, I ask, what’s next for Amy Zhang?

“I would love to be remembered as ‘that girl whose book we had to read in English class’,” Amy says, laughing. “No, seriously, I would want my books to be taught in a high school classroom, I mean it’s always been a dream of mine to be part of a curriculum. I remember reading Speak by Laurie Halse Anderson in 9th Grade and I’m remembering how important the discussions we had from that book were, the awareness that it brought, the way it made us think, I think that’s just so important.”

“And I guess that’s the best thing about being a writer, the feeling of knowing that whatever beauty, depth, and clarity you used to find in books you can now provide to someone else. It’s incredible, being able to bring something positive to someone else’s life,” Amy says as our conversation draws to a close.

Had Amy Zhang been a cookie-cutter teenager, this particular Tuesday afternoon would be spent in her room, with her doing everything a college student her age would do: organizing her readings, studying for her exams, and reviewing her lessons. Not, you know, preparing for hours of signing books and meeting scores of readers in a country some half a world away from the United States.

But then again, Amy Zhang isn’t a cookie-cutter teenager. And I can’t wait to see more of her.

Falling Into Place and This is Where the World Ends by Amy Zhang are available at National Book Store. 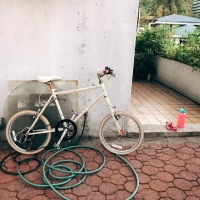