Monkey Eagle Brewery, a microbrewery in the Philippines founded by brewers Noreen Lao and Ricardo C. Lopa Jr., just launched its newest beer called Free Flow. A Bohemian Pilsner made with a recipe originating from the Czech Republic, it would be Monkey Eagle’s first crack at a style of beer that most Filipinos are familiar with – the Pilsner/Lager.

“Versatile and refreshing, Free Flow (which has an ABV 5% and an IBU 25) is a Bohemian Pilsner which is our ode to one of the oldest styles of beer. We developed a lager that would introduce commercial beer drinkers, beer enthusiasts, and anyone passionate about libations to try and experience a historic beer style that originated in 1842 in Czech Republic,” says
Noreen Lao.

Dating back to the 1800’s, the Bohemian Pilsner is one of the oldest and most
traditional styles of beer. Many commercial beers commonly found in the Philippines are actually of this same style. With Free Flow, Monkey Eagle Brewery refined the process and added their own style using their German-made equipment and the practices they picked up studying abroad.

Upon drinking the beer, you pick up biscuit-like notes with a crisp and slightly
sweet finish. Versatile, crisp, and refreshing, you can drink this beer any time of the day and easily pair it with almost any food. As with any of Monkey Eagle’s beers, you’ll also find that each bottle is consistently made with the most sanitary brewing practices and techniques.

Monkey Eagle Brewery is a craft beer company in Tagaytay, Philippines which started in 2014. Known for their beers like Psychedelic Blonde Ale, Saison Farmhouse Ale, and General Luna Ale, Monkey Eagle has been producing premium-quality craft beers made with the finest ingredients and the best sanitation practices in brewing. Each year, the company brings new
additions to their lineup such as Summer Slice Watermelon Kölsch, Daydream, and now Free Flow. 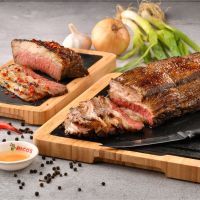